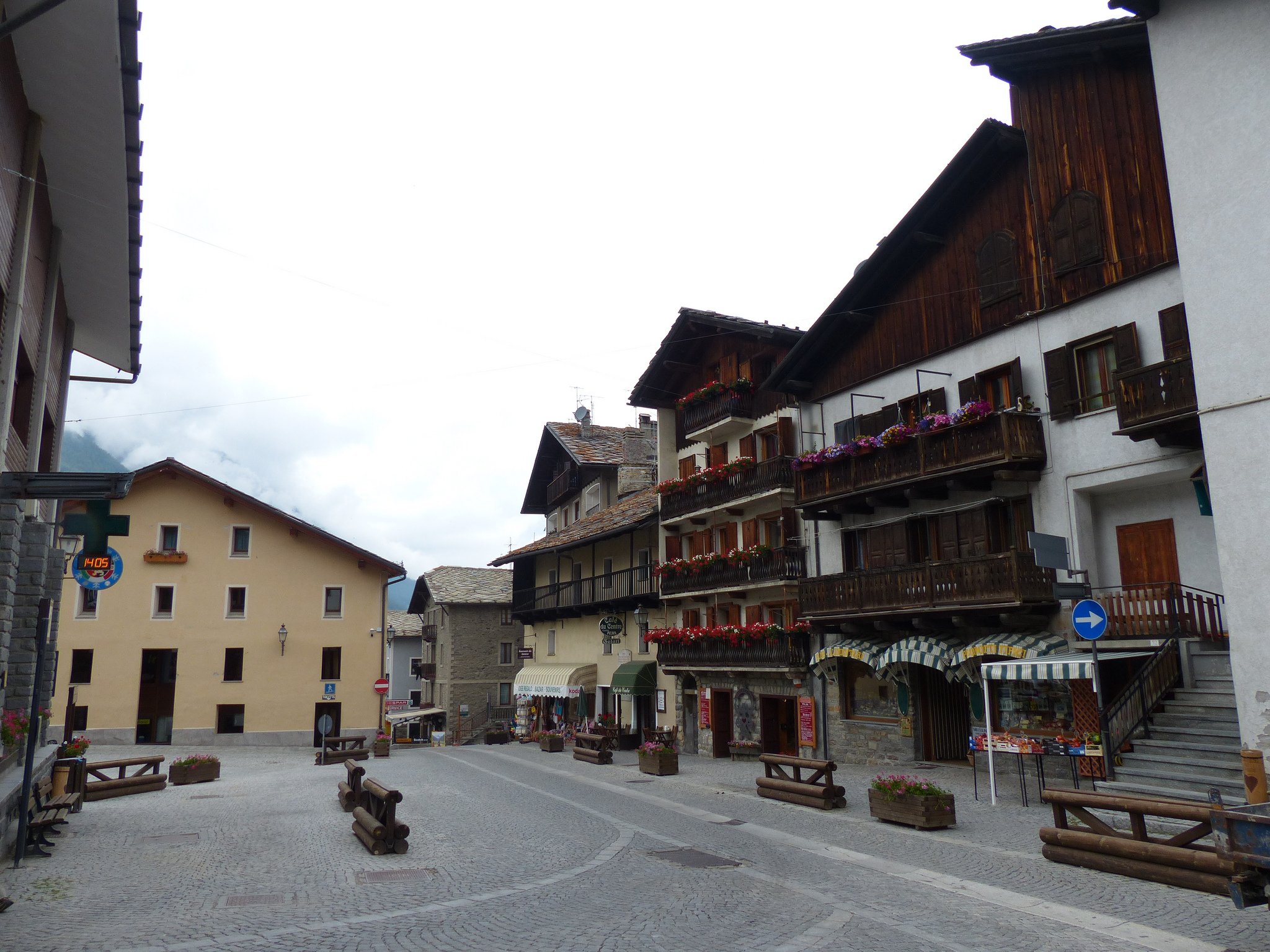 In the southern territories of the Aosta Valley, Cogne is a scattered municipality that has about 1400 inhabitants. It rises at the foot of the Gran Paradiso in the center of the valley to which it gives its name, the Cogne Valley.
Cogne is the largest municipality in the entire region, the town is located at the confluence of five valleys, Valnontey to the south, Vallone di Grauson to the north, Vallone dell’Urtier to the southeast, Vallonne di Gimillan to the east and the Cogne Valley itself. .
The municipal territory of Cogne also hosts the famous Prati di Sant’Orso, one of the “Wonders of Italy” famous for hosting the traditional Bataille des Reines – a folkloric clash between Alpine breed cows. Cogne is one of the most important localities in Val d’Aosta for Nordic skiing, where, for example, the Gran Paradiso March and the Cross-Country Skiing World Cup are organized.
Cogne was once a mining center for the extraction of iron, but with the closure of the mines the city and the valley has become one of the main tourist destinations in the region.

History of the city of Cogne

The Cogne Valley was inhabited by the Salassi and the Romans who were the first to exploit the wealth of magnetite deposits in the localities of Liconi, Colonna and Costa del Pino.

The mining sector represented for Cogne, without interruption until 1979, the year of the closure of the mines, the main source of income, there existed at the mines, at the Colonna mine, there was also a small village where there was a cinema, a library and a small shop.

During the Second World War, the inhabitants of the Cognie Valley were exempted from military service to ensure the continuity of iron mining, this condition and the relatively isolated position of the valley, contributed to the birth of a Partisan Republic, with Francesco in camp. David, elected mayor, the republic had a free radio and a newspaper “Il Patriota” directed by Giulio Einaudi. The Partisan Republic of Cogne ended on November 2nd, following a German attack.

Mining remained the main economic activity of the valley until the end of the 1970s, magnetite was extracted from the mines of Colonna, Larsinaz and Liconi, then transported and processed to the Cogne steel mill in Aosta. The mines were definitively closed in 1979.

What to see in Cogne

Church of Sant’Orso: legend has it that the construction of this church in Cogne took place by divine will. In fact, there was no church in the town and the faithful, in order to attend mass, had to travel a long way to get to Crêt, where there was a small chapel, tired of this situation, the inhabitants decided to build a church in Cogne and chose as definitive place is the hamlet of Lisardey, on the right bank of the stream. Relics were then brought to the place to begin the construction of the sacred building but during the night they disappeared, to miraculously reappear on the other bank of the stream, and this happened for many other times. The inhabitants of Cogne then, interpreting this event as a divine sign of God’s will to have the church built in that place, changed their minds and built the Church in Cogne. The church is dedicated to sant’orso, a priest originally from the Val d’Aosta who lived between the seventh and eighth centuries, the construction of the church is certainly prior to 1184. Inside, the church has a single nave and houses some carved and gilded wooden altars, dating back to the 18th century.

Tarambel stronghold: located between the hamlets of Crétaz and Epinel, it is an ancient medieval fortification, dating back to 1198, which belonged to the noble Chésallet family. The fortress then belonged to the Bishop of Aosta and to the Mogni family.

Casaforte Villette: of medieval origin, this fortification rises along the road that leads to Valontey. Dating back to the thirteenth century at the behest of Umberdo di Villette, then appointed bishop of Aosta in 1266. Composed of two buildings, a tower and a stronghold, the building was destroyed by a fire in 1531 and rebuilt in the 17th century.The building is now privately owned.

Maison de Cogne Gérard Dayné: ancient rural house dating back to 1600, an interesting example of the traditional wood and stone architecture typical of the Cogne Valley. Today this rural house has been transformed into an ethnographic museum.

Paradisia Botanical Garden of Cogne: botanical garden with over 1000 native species of the Aosta Valley and other mountain areas of the world.

Prati di Sant’Orso: awarded with the recognition of “Wonder of Italy”, these green meadows of the Cogne Valley each year host one of the most famous competitions in the region, the Bataille des Reines, an exciting “clash” between cows of alpine breeds.

Miniere di Cogne : the mines have represented the main economic source for Cogne for centuries and still today in the miners’ villages the cableways used for the transport of materials, the cableway that connected Cogne to the main mine, that of Colonna and the annexed buildings, a library are still visible , a shop and a cinema. Today in the miners’ village the visitor center of the Gran Paradiso National Park and the Alpinart Exhibition Center have been created, which hosts a temporary exhibition on the mine. The mines are now open to the public and can be visited through guided tours.

Cogne is one of the main tourist destinations in the Aosta Valley, at 1524 meters in the heart of the Gran Paradiso National Park. This locality is particularly famous for Nordic skiing and winter sports and in summer it is ideal for trekking, mountain hikes and walks.

HOTEL LE BOUQUET : surrounded by the green woods of the Gran Paradiso Park, this hotel is a five-minute walk from the city center. Family-run, this hotel offers its guests rooms inspired by the names of flowers, with a balcony or private garden.

HOTEL STAMBECCO : family-run hotel in the center of Cogne and just 200 meters from the cable car. Rooms and suites with panoramic views.

BELLEVUE HOTEL & SPA : historic hotel in Cogne, founded in 1925, is located near the Prati di Sant’Orso, with a spectacular view of the Gran Paradiso glacier. 36 rooms and 3 chalets, each accommodation different from the other, for a unique relaxation experience, some rooms have a Jacuzzi and fireplace, others a private sauna. Guests have access to a restaurant and a wellness & spa area.

LA MADONNINA DEL GRAN PARADISO WELLNESS HOTEL : hotel overlooking the Prato di Sant’Orso in Cogne, has rooms and suites, some with mezzanine, others with jacuzzi, all accommodations are furnished in mountain style. Guests have access to a restaurant and a wellness area.

Cogne is the ideal tourist destination that combines nature, sport and food and wine in one place. It is one of the most famous ski resorts in the Aosta Valley, located at the foot of the Gran Paradiso, in the heart of the protected park and its traditional cuisine is the best you have ever tasted! Many traditional dishes, local and genuine ingredients and ancient recipes, often revisited, for a unique food and wine experience!

Beautiful … vast and unspoiled, a true wonder of nature! Admire it from above from the hamlet of Gimillan …

Fantastic, especially if you take the tour with the guide, who provides interesting information about the plants that populate the garden, an experience not to be missed in Cogne!

House museum in the classic rural architectural style. Often the house museum hosts temporary exhibitions, it is certainly an unmissable stop in Cogne!

It is by far one of the most beautiful experiences we had during our holiday in Cogne, a full immersion in the history of the mines in the valley, very interesting!