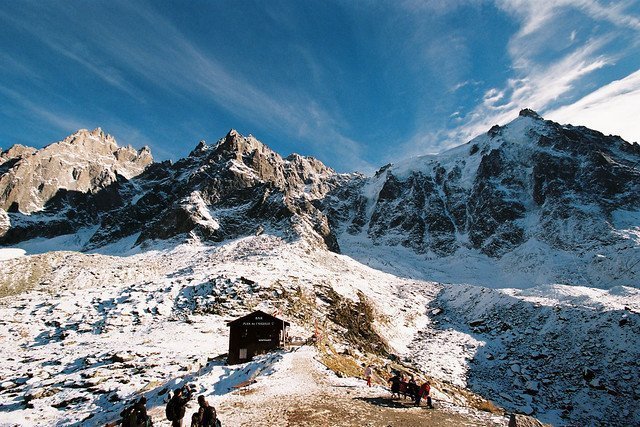 Nicknamed “The Roof of Europe” Mont Blanc is the highest mountain in Europe, with its 4808.72 meters (from the last official measurement of 13 September 2017). However, there is a question concerning its height and which intrigues enthusiasts and experts: the height of this mountain undergoes continuous variations and there is no definitive height, as it is subject to continuous changes. This variation can be easily seen from the official surveys of the last 40 years:

However, this phenomenon is easily explained by taking into consideration the glaciers found on the top of the mountain. From year to year, with varying temperatures, the height of the glaciers varies, which can obviously increase or decrease.

The main peaks of Europe are found in the Caucasus chain which, due to its particular geographical location, is a reason for discussion for its belonging to Europe or Asia. The Caucasus is home to the imposing European peaks, followed immediately after by Italy, France, Switzerland and Spain.

The term “seven summits” indicates the seven highest mountains for each continent:

The seven summits represent a real challenge for all mountaineering enthusiasts, but to date only one person has managed to climb all 7, it is the American Richard Bass, entrepreneur in the oil and gas field, who finished his business on April 30, 1985. A great lover of mountaineering, Richard Bass together with his friend Frank Wells (at the head of both Warner Bros and Disney), started this ambitious project in 1981. The two climbers planned to climb the 7 peaks in one year, 1983. In the same year they managed to climb the peaks of Aconcagua in January, Denali in July, Kilimanjaro and Elbrus in September, Vinson in November Kosciuszko in December. They tried three times to climb Everest, but when the third attempt failed, Wells gave up the feat, which was carried out only by Richard, who managed to climb the last peak on April 30, 1985.
Subsequently other mountaineers attempted the feat, also setting new records: