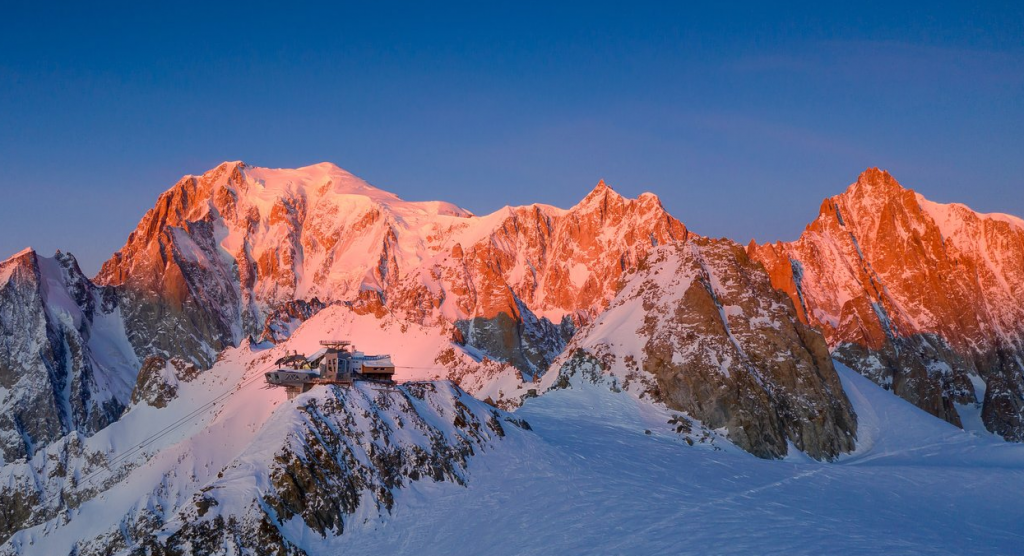 Near Courmayeur, in La Palud, the Mont Blanc cable car departs which takes about 60 minutes to get to Chamonix, on the French side, completely crossing the mountain range of the Alps. It was born with purely military purposes in 1947 – on Mont Blanc there were in fact special finds trained for war in the mountains -.

The cable car makes six stops, Pavillon di Monte Frety, at 2175 meters, the Torino Refuge at the Colle del Gigante, at 3330 meters, Punta Helbronner, at 3462 meters – from here you can admire the famous 4,000 of Europe, Matterhorn, Monterosa , Grivola and Gran Paradiso – then continues towards Aiguille du Midi, at 3842 meters, Plan de l’Aiguille at 2137 meters and finally Chamonix. In 2011, the renovation works of the Italian line were started, a new departure station was built and the station at the Torino Refuge was eliminated.

The history of the Mont Blanc cable car dates back to the 1930s when Count Dino Lora Totino, a great mountain lover, had the futuristic visionary idea of building a link between Courmayeur and Chamonix. In 1941 work began for the construction of the first plant that connected Pavillon di Mont Fréty at an altitude of 2173 meters from the hamlet of La Palud. The works were interrupted during the Second World War but immediately resumed and in 1946 the second section of the cable car was built, which reached the Turin Refuge at 3329 meters. In 1947 the cable car was inaugurated, the works continued and in 1951 the second section was built that reaches the Aiguille du Midi. In 1954 the construction site was opened to finish the last stretch on the Italian side, up to Punta Helbronner and in the same year work also began for the construction of the cableway that crosses the glacier.
The cable car continued its work until the 2000s, when the idea of building a new, more technological plant was born, giving life to the “Skyway Monte Bianco“ project.