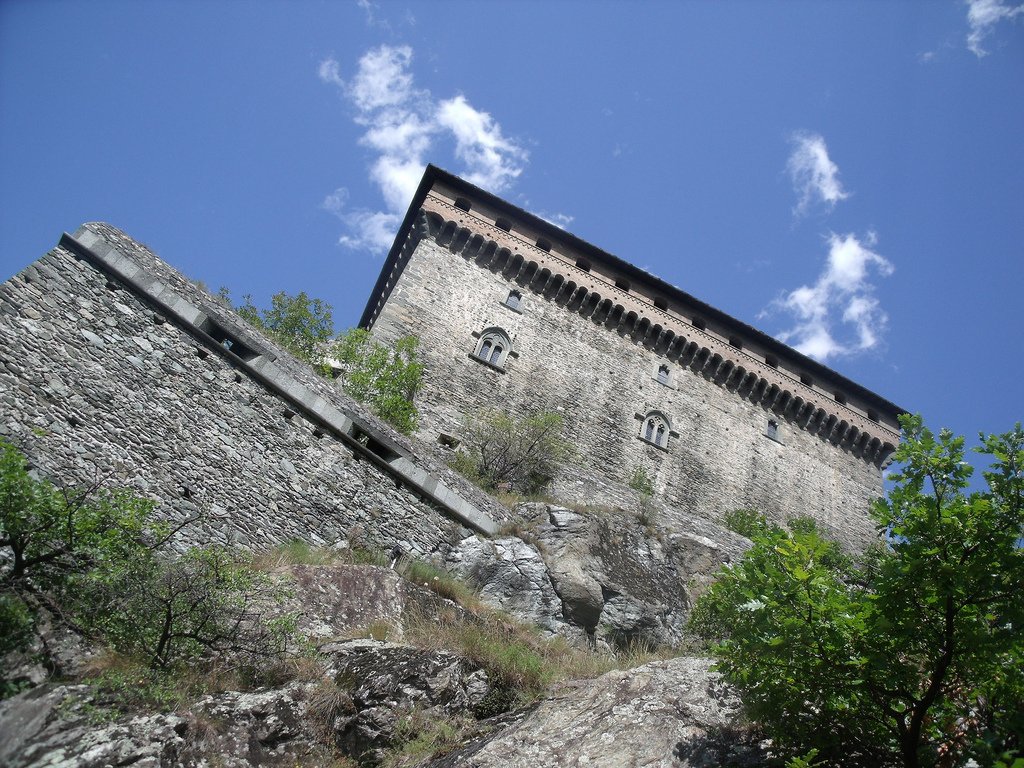 The castle of Verrès is one of the most visited monuments in the Aosta Valley. It may also be because it is a living castle, which every year relives its ancient history: it is, in fact, the stage of the famous Historical Carnival of Verres. Four days of masked balls inside the castle, during which episodes from the life of Catherine of Challant and her husband Pietro d’Introd are recalled, and the opera “A game of chess” by Giuseppe Giacosa is represented.

From the top of the rocky promontory of the village of Verres, the castle dominates a splendid valley, and the mule track of the Challand-Ayas valley. The manor appears austere and harsh from the outside, due to its monobloc structure and without decorations, built for purely defensive purposes. It was the Valdostan nobleman Ibleto di Challant who profoundly changed its structure in 1390, but the history of the castle is much older. Due to its position on the opposite side of the river from Issogne castle, it stands out for its austerity and lack of decorations.

The castle can be visited inside and attracts many people every year.

Thanks to some documents found, we know that a structure once stood here in 1287, owned by the De Verretio family, a feudal family of the Savoy Counts. The latter ceded the manero to the noble Ibleto of Challan, when the De Verretio family was extinct. Ibleto had the castle renovated in an original way with respect to the fortified structures typical of the area, which instead were made up of several bodies, surrounded by walls. The works ended in 1390, as the Latin inscription on the lintel of the entrance door recalls. Ibleto’s descendants fought over the fort’s inheritance for a long time. According to tradition, the episode that, according to tradition, saw Caterina, daughter of Ibleto, go down to dance with her husband in the town square together with the locals, an episode that is remembered every year in the Historical Carnival of Verres and that did love Catherine to her people.

In 1536 the fortress was enriched, thanks also to the help of the Spanish captain Pietro de Valle, a famous military architect, of a wall equipped with buttresses and polygonal turrets, to adapt to the firearms of the time.

A period of abandonment marked the fortress, until, after a series of changes of ownership, it was bought by the Italian state.

The first restoration of the castle took place in 1894, after which it passed to the Autonomous Region of Val d’Aosta and was declared a national monument.

The guided tour leads to an interesting and detailed discovery of the interiors of the ground floor and first floor.

Splendid example of a military fortress

Although only the ground floor and the first floor can be visited, the guide described the rooms open to the public and the history of the fortress in a very interesting way, full of details and curiosities. Having been built for defensive purposes, it is very different from the other Aosta Valley castles, but it deserves to be visited. It is possible to take pictures without flash in the castle. Highly recommended.

I have been there several times both in a group and with my family and I have always taken the guided tour. Very nice and well kept castle. It is also used and rented for various parties (Carnival the most spectacular). For those on tour in Val d’Aosta I recommend it!

Seen from the outside, thanks to the battered state of the appurtenances and the very rough appearance of a cubic fortress (very different from that of Fénis or Verrès), it does not encourage. There is also a rustic access mule track (less than three hundred meters, although a little uphill and certainly bumpy). But the interior of the castle, although devoid of decorations and furniture, appears in all its majesty as a military fortress, certainly not like a sumptuous palace. The stone staircase that rises to the upper floors from the internal courtyard is splendid, as is the four-light window on the first floor, and the kitchen with three fireplaces, one of which is huge.

Well preserved castle perched on a hill, very impressive. From the village you go up with a somewhat steep but easy path. Low admission price also calculating the guided tour which is very interesting and detailed. The interior is devoid of furniture but reserves unexpected architectural beauties. Definitely worth visiting.

The location on a rocky peak is spectacular and the guided tour with expert and trained staff is very interesting. Very cheap price. The walk to the castle is also beautiful.