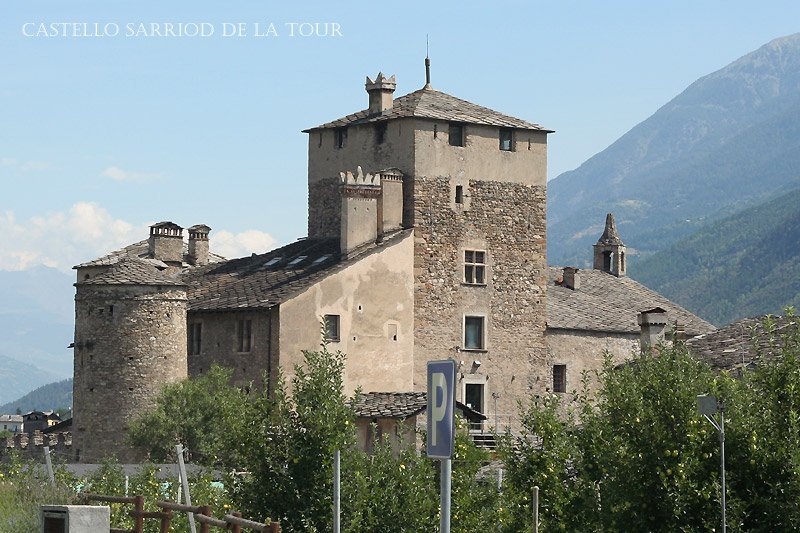 Surrounded by a splendid orchard stands the Castle of Sarroid de la Tour! Unlike the other castles, this one rises in a flat area; we still don’t know the origins of the rest of this castle. It belonged to the Sarroid family until the early twentieth century. The main feature that catches the eye when visiting the castle is the discontinuity and composite aspect of the structure, due to the various interventions that have taken place in different eras.

The original layout included, like all the castles in the region, the chapel, a central tower with a square base and a wall, but we know that in 1420 it was Jean Sarriod who enriched the existing structure. In the late 15th century the walls were equipped with defensive towers with a circular and semicircular plan and a new entrance to the castle was opened on the east side, with a pointed portal and a sculpted archivolt bearing the Sarriod coat of arms.

The visit to the castle deserves above all two details: the frescoes in the chapel (internal and external) and the “Hall of the heads”. Inside the chapel, in fact, some remains of an important cycle of early thirteenth-century murals are still visible, while outside, in the adjoining room, there are fifteenth-century frescoes, commissioned by Antoine Sarriod de la Tour, son of Jean. These frescoes are the work of an unknown artist but belonging to the Franco-Piedmontese school with efforts towards Flemish painting; the unknown painter was given the name of “Maître d’Antoine de Sarriod de La Tour”.

The so-called “Room of the heads” instead is located on the first floor, in the main hall of the castle: the room has 171 figures carved in the corbels of the ceiling beams, with a surprising variety. here faces of medieval men and women are mixed, but also fantastic subjects and carnival figures, which flow almost into the grotesque! The wood carving work is certainly of relevant interest for the history of wooden sculpture in the Aosta Valley.

Full € 3.00
Reduced € 2.00
Reduced Children 6-18 years € 1.00
Free for children up to 6 years, handicapped and accompanying persons, teachers and carers with groups

Castle to be discovered

It is not one of the “famous” castles of Val d’Aosta but it is a destination not to be missed! An hour or so for a journey from the late Middle Ages to the early Renaissance. A path that the guides are able to make you experience with participation. There is no furniture but the frescoes in the chapel and the ceiling in the hall of heads are really worth seeing!

Beautiful castle dating back to the thirteenth and fifteenth centuries. Medieval environment remained in many respects intact. The wooden ceiling of the living room is fascinating, decorated with many fantastic characters carved in wood.

Don’t be fooled by the outside

From the outside it may seem sterile but the inside holds many beautiful surprises! From the two-story chapel with beautiful frescoes both inside and out, to the room with a wooden ceiling decorated with hundreds of different faces, to the monumental fireplaces (there is even one with a door in the middle, where there was be the hearth). Definitely beyond all expectations, thanks also to an excellent guide.

A small but interesting castle in the heart of the Valley a few kilometers from thermal baths and ski resorts. Noteworthy is the room of the heads with its beautiful ceiling and the fresco of San Cristoforo. An additional advantage of this castle are the highly trained guides.

It stands out from the others

Beautiful location in the middle of an orchard. Quite rustic on the outside also due to the numerous changes. Internally it is unique in the whole valley due to the presence of the remains of frescoes from the 14th century, unfortunately hidden by subsequent modifications, but currently brought to light.